AERA Management Committee, as advised, met on 10 November to discuss proposals for hosting of the Tom Quilty Gold Cup in 2023.

The proposal from QERA and from Stirling's Crossing Endurance Club to host TQ23 was accepted and this event will be held at Imbil, Queensland on 23 - 25 June 2023.
AERA Management Committee would like to thank everyone who has contributed to the planning of a Tom Quilty event in 2023.
Congratulations to the 2023 Tom Quilty Committee.
Regards
Kim Moir
Secretary
Australian Endurance Riders Association

AERA is pleased to advise that all 14  swabbing samples gathered  at TQ22 have returned a negative analysis. This refers to controlled medications and banned substances. These are reported on the Equestrian Australia website.

Testing of horses for prohibited substances as listed on the FEI website is important in contributing to horse welfare.

Members are reminded that swabbing may occur at any endurance event and selection of horses to be swabbed is determined by the Chief Steward and the Head Vet.

Linda’s contribution to AERA, since her appointment to the AERA management committee four years ago and, in particular, her election as President two years ago, has been immense. Under her guidance and leadership, the organisation has revamped the AERA website, tightened up its governance significantly and has recently implemented the initial incarnation of AERAonline, a platform that has the potential to greatly streamline the activities of AERA, its member associations and endurance clubs around the country. Linda has agreed to continue as a member of the AERA Database Sub-Committee to continue this development work.

The AERA management committee is sad to see her go but accepts that it is always necessary for people to move on when the time is right.

‘Linda’s contribution to the work of AERA has positioned it well to oversee the further development and growth of the discipline of equine endurance riding in this country. AERA is grateful for her efforts and wishes her well for the future. ’

ADMINISTRATION OF CONTROLLED MEDICATIONS AT AN ENDURANCE EVENT

Linda Tanian 07 May 2022
The following statement has been put together by AERA's National Veterinary Panel and is supported by the AERA Management Committee. A very clear definition of when an event starts and ends is being developed to provide clarity for all members.
The AERA National Veterinary Panel (NVP) wishes to comment on an issue that has arisen recently and is of concern to NVP members.
Some controlled medications which may normally be considered beneficial to a horse’s welfare, can actually cause severe harm to a horse if given close to (before, during or after) an endurance ride.
Rule 17.1 of Section 5 (Equine Anti-Doping and Controlled Medication Rules) of the AERA rule book notes, in part, that “No controlled medication substance shall be given to any horse during or close to an Event unless the appropriate AERA guidelines for medication authorisation have been followed.”
The NVP would like to remind all those participating in endurance riding in Australia of this rule. Using slightly different words, no controlled medication may be administered to a horse at an event – from the moment it arrives at the ride base, until the ride has officially finished without the permission of the treatment and/or head vet of that ride.
Although medications given post ride may not be considered “performance enhancing”, endurance horses can take up to 24 hours to recover from dehydration. Some medications including common anti-inflammatory medications (eg ‘bute’) given to a dehydrated and/or metabolically compromised horse have the potential to cause severe intestinal and/or kidney disease that may result in death.
In summary, for the welfare of endurance horses and the integrity of the sport and the endurance riding family, no controlled medication should be administered to a horse at an event without the express permission of the treatment or head vet at the event.
Dr Khyle Stewart
NVP Chair

A further update on progress with the AERA Online Nomination System.  The TQ22 Committee have been trialling selling the TQ merchandise via the Online Nomination System with brisk sales being achieved.  The next step for them is to run the nominations for the Quilty event online as well.  Look out, in the coming days, for the announcement that the nominations will be opening.

In conjunction with the Southern Tasmanian Endurance Riders Club, the next ride in Tasmania will take nominations online for the event in a further test run for the system.  Trish Smith and Jess Goulding, capably supported by Mark Dunn, have sat through a training session and learnt how to set up their ride data.  They are busy doing this in the live system now so all Tasmanian riders should stay tuned for the announcement that nominations are open.

Once the trial has been completed and any issues rectified the Online Nomination System will be open for any ride club to use.  Training sessions are being planned with supporting training material being finalised.  These training sessions will be announced in the near future and all will be welcome to attend.

The AERA Database SC have worked through the refund and reconciliation processes for passing on funds to clubs who are going to be utilising the Online Nomination System and these background processes are now up and going.  The Westpac Payway payment gateway is also in place and has been tested through the Quilty merchandise purchasing.  Our thanks go to Deb Edwards, AERA’s tireless book keeper for her assistance and knowledge in this area.

AERA will be adopting a low transaction fee initially to provide encouragement to Ride Clubs to use the Online Nomination System.  This early bird transaction fee discount approach also recognises that not everything will work smoothly, despite the many hours spent testing and trialling, and we thank those clubs who have already put up their hands to help us out.  The support already expressed is very much appreciated.

Riders who nominate will be charged the Westpac bank card transaction fee, which is $0.55 + 1.2% as part of the nomination process, as is standard these days of living online.  This transaction cost is identified at the point of payment and on the invoice/receipt generated by the online nomination system.  The transaction fee charged by AERA is passed onto the Ride Club and covers the use of the system and a contribution towards the build cost, which will be repaid over the next few years.  AERA will re-visit the transaction fee at its November meeting, in which the fees and charges of the association, on a whole, are reviewed.

The response from members in creating their accounts ahead of the usage of the Online Nomination System has been pleasing with the early teething issues now being sorted out.  Most people are getting through the process of setting up their accounts without any further assistance.

Linda Tanian 10 April 2022
TQ22 Merchandise is now available for order via AERA’s Online Nomination System. The TQ22 Committee is very pleased to be partnering with AERA to support the role out of this major development of the AERASpace software.
The initial range in our commemorative TQ22 Quilty merchandise line can be ordered from the AERA Online website: www.aeraonline.com.au. The offering includes buff shirts, unisex riding tights, polo shirts and a technical endurance shirt in our bespoke Quilty 2022 design.
Orders for this merchandise need to be submitted by 9 pm on 1 May 2022 to enable the orders to be passed onto our manufacturer and prepared ready for pick up at the Quilty event. Orders received after this date cannot be guaranteed to be available at the Quilty and these orders will be mailed out, incurring postage and handling fees. So get in early to have yours available for pick up.
Nominations for the Quilty event will be available at a later date.
To place your order you must first create an account, which can be done in a few easy steps:
1. Go to the Login page
2. Select the Register as a new user option
3. Enter your email address, password (note the specific requirements for the password) and confirm the password by typing it into the next field
4. Select the register button
A confirmation email will be sent to the email address entered and then you are set to navigate to the Events page and start ordering your merchandise.
For current or past member you need to log in with the email address associated with your membership so that you can link your account to your existing ride records. If you are unsure of your email details, please contact your State Registrar/Membership Registrar.
If you experience any difficulties creating your account or placing an order please email for support. Please be aware that this is not a 24/7 support line and a response will be sent as soon as possible.
AERA is keen to know what you think of the AERA Online website so please let us know.

EXPRESSION OF INTEREST FOR CHEF D'EQUIPE

Equestrian Australia is calling for Expressions of Interest for Chef d'Equipe for the Australian Endurance Team ahead of the 2022 FEI World Championship.

A position description and application form for this role can be found by clicking on this link: 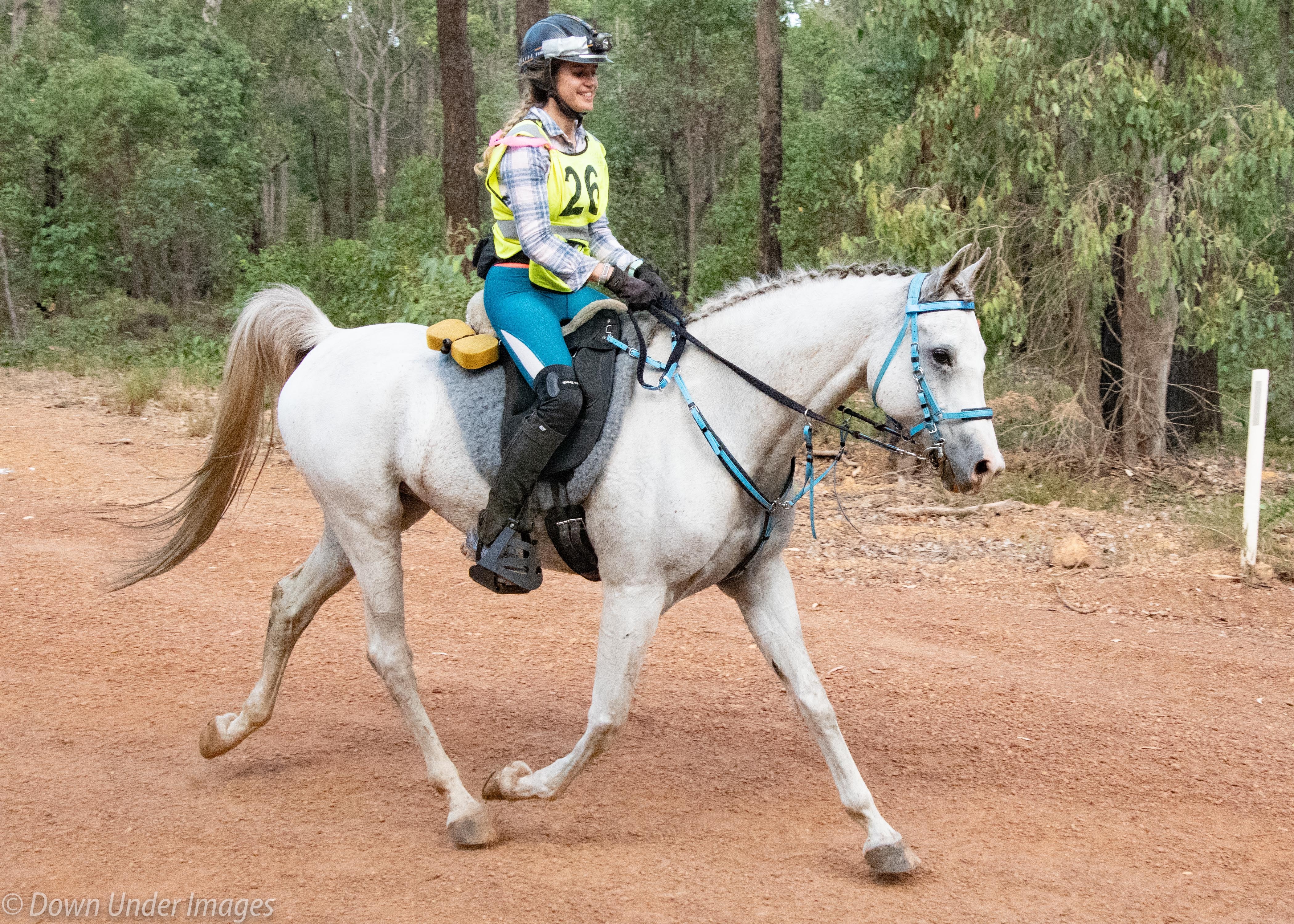 Mattilda Arabians Australia (formally Marbling Arabians) are extremely proud of Marbling Galaxy for achieving the 2021 Endurance Horse of the Year award by the Arabian Horse Society of Australia.

Marbling Galaxy is a 12 year old Purebred Arabian gelding by Marbling Star of the East out of Marbling N'Shala, bred in WA by the late Nola Cameron of Marbling Arabians. This stud has now been taken over by Lynne Bunce and renamed Mattilda Arabians Australia, who continue to breed horses of extreme beauty and athleticism. Galaxy is currently owned and ridden by Siobhan Wilson (nee Darlow).

Galaxy has successfully completed 35 rides to date to a total of 3236km. 20 rides and 2002km in the lightweight division and prior to being owned by Siobhan, Galaxy completed 15 rides and 1234km in middle and heavyweight divisions and was awarded WA HWT Points Horse, 2nd WA HWT Distance Horse, and Overall HWT Best Conditioned Horse in 2017.

Siobhan and Galaxy have successfully completed and received a top 3 placing in every endurance ride they have entered and won 12 Best Conditioned awards over the 2019 (6 BCs) and 2021 (6 BCs) seasons including WA Overall LWT Best Conditioned Horse in 2019 and 2021.

Galaxy is an outstanding performance horse and his looks and athletic movement never fail to catch the eyes of spectators. Siobhan and Galaxy look forward to their season ahead in endurance and are enjoying their time spent attending local dressage events and adult rider rallies. 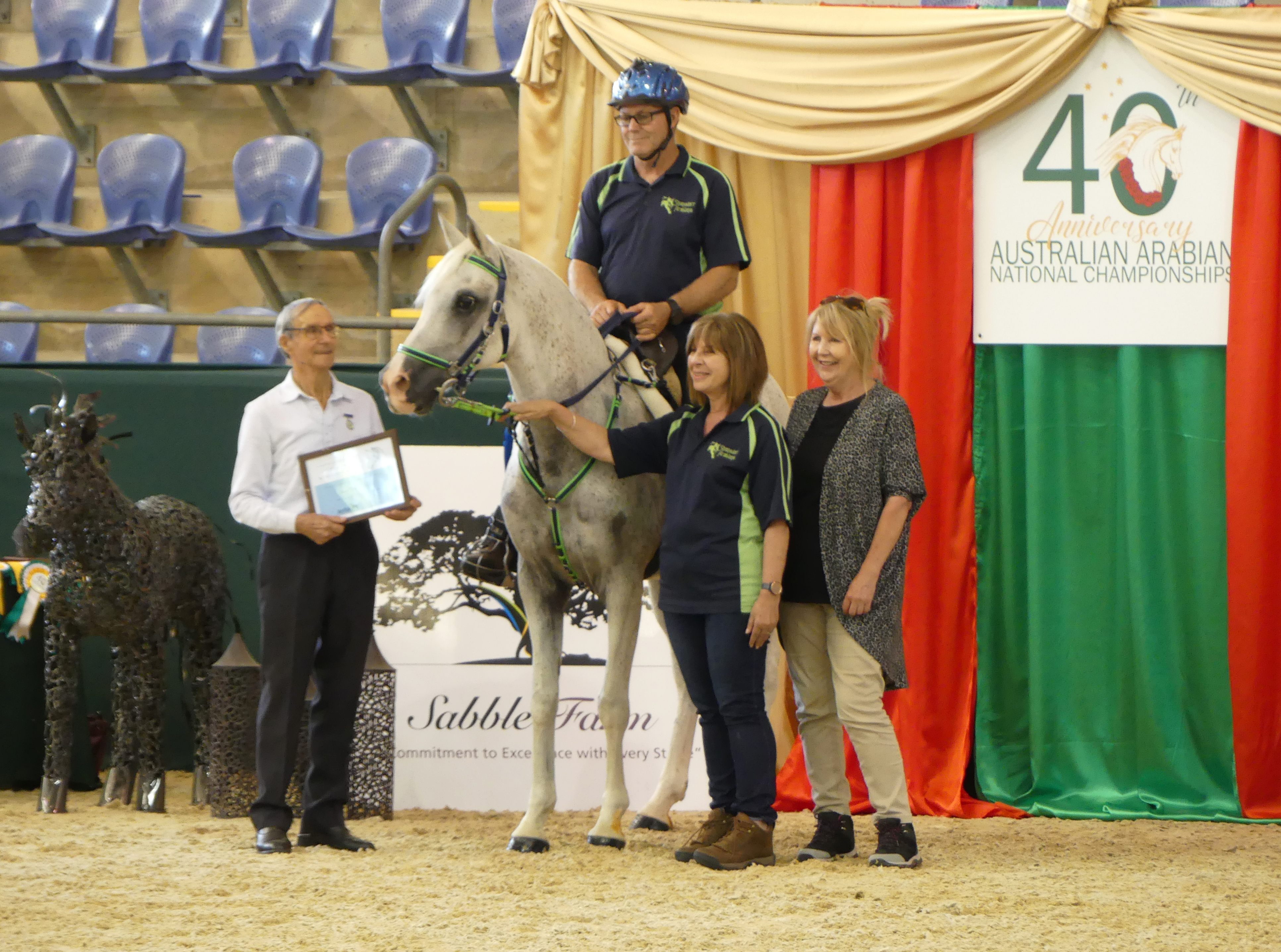 The AERA would like to congratulate James Bonn on being award the Lifetime Achievement Award in Endurance.

Shanadarr Arabian Stud are very proud that James Bonn has been awarded the Lifetime Achievement Award in Endurance by the Arabian Horse Society of Australia.

James Bonn is a 13 year old Pure Crabbet gelding by Bonn out of Blue Bead Ingrid, bred by Anne Maher of Anneka Arabians, and he is owned and campaigned by Darryl and Stephanie King of Shanadarr.

James and Darryl have completed 27 rides to date - 2372km in the NSW Middleweight Division and they have consistently placed at rides over the past 8 years. They have won 9 Best Conditioned/Fittest Horse awards and won 8 rides with 7 of them 1st overall, 8 x 2nd places, 3 x 3rd places, 4 x 4th places.  We are honoured that this prestigious Award was presented by Ron Males at the 2022 40th Anniversary Australian Arabian National Championships.