Endurance riding has been an organised sport in Australia since 1966. Reports of the Tevis Cup endurance ride in the USA began reaching Australia. One person inspired by the concept of a long distance competitive horse ride was R. M. Williams, editor of Hoofs and Horns, a pioneer horse magazine in this country. It had a wide circulation and printed stories and reports of the Tevis Cup. An invitation was extended through the magazine for people interested in conducting Australia’s own 100 miles in one day ride, to attend a meeting at the Australia Hotel, Sydney on Tuesday 5th April, 1966 to discuss the possibility of organising such a ride in Australia.

Twenty-three people attended to consider two submissions, one from the Mallee district of Victoria and the other from the Hawkesbury district, near Sydney, New South Wales. History shows that the Sydney offer was accepted, being a relatively central, scenic location, with the support of the University of Sydney’s Rural Veterinary Centre, Camden. A committee was formed to organise the first 100 mile ride, modelled on the successful Tevis Cup ride in the USA.  This committee was called the Tom Quilty Endurance Ride Committee.

On the 23rd of October, 1967,  it was moved by Mrs G. McArthur and seconded by R.M. Williams,  that the name of the newly formed committee would be changed to the Australian Endurance Riders Association.

Some Reflections on the Quilty 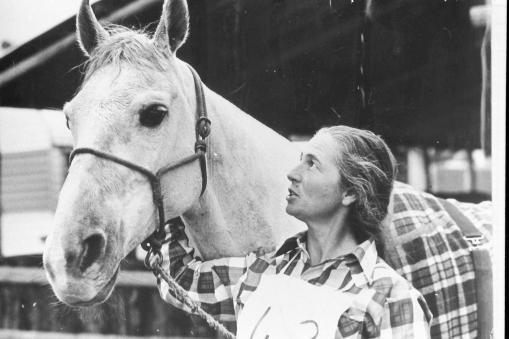 Reports began to reach Australia through horse magazines of a long distance competitive horse ride in the United States of America. It was called the Tevis Cup and began at Tahoe in Nevada and crossed through the Sierras for 100 miles to Auburn in California. Riders rode for the satisfaction of proving it could be done in twenty-four hours or less and so earned themselves a handsome silver Tevis belt buckle. A few of us felt that anything the Americans could do, we should be able to do also, and so the idea was born to have our own 100 mile ride in one day in Australia.

The crusade was taken up by R.M.Williams, Editor of Hoofs and Horns, a pioneer horse magazine in this country. It had a wide circulation and printed stories and reports of the Tevis Cup, so enthusiasm for the concept was kindled. Through the medium of Hoofs and Horns, an invitation was extended to all interested persons to attend a meeting at the Australia Hotel, Sydney on Tuesday 5th April, 1966 at 7 p.m. (during Sydney Royal Show week) to discuss the possibility of organising a long distance competitive ride somewhere in Australia.

Twenty-three people attended to hear two submissions; one from the Mallee district of Victoria and one from the Hawkesbury district, just west of Sydney, New South Wales. It is history now that the Sydney offer was accepted due to its central location for most States, the veterinary support from the University of Sydney’s Rural Veterinary Centre, Camden, and the promise of interesting country to ride through. A steering committee was formed to organise a 100 mile ride, modelled on the Tevis Cup ride in the U.S.A., which had been running successfully for a few years.

If we had known how difficult it was to be, we might not have started. Due to enthusiasm, hard work and determination, the first Quilty happened! We had tremendous support from Mr. Turnbull, president of the local Shire of Colo and his assistant Shire engineer Charles (Chuck) Stephens, Richmond Shire, Professor David Hutchins from the University of Sydney and Mr. Charley, a prominent citizen. Ron and Val Males of Ralvon Arab Stud, Windsor, found the track and pressganged their many friends into assisting with the numerous tasks. Erica Williams was the secretary who handled the paper work from afar (Eidsvold, Queensland).

Because of adverse, mis-informed newspaper articles in the Sydney daily press in the lead up to this first ride, the Royal Society for Prevention of Cruelty to Animals of N.S.W. was determined to prevent the ride from happening. The R.S.P.C.A. was defeated in their efforts essentially because of the strong support from Professor David Hutchins. His professional standing was so high that the R.S.P.C.A. could not engage a veterinarian who would oppose him… The role of the R.S.P.C.A. in those early years re-inforced our conviction that very strict veterinary standards must govern endurance riding in Australia. Professor Hutchins based the veterinary standards which he formulated for the Quilty on those used by the Tevis Cup plus the results of some practical work done by two of his final year students at Rockybar, Eidsvold, Queensland. Horses in training for the first ride plus some station working horses were ridden over set distances and times. These Australian results confirmed the American figures of the time. Since then, with information gained over many endurance rides, the veterinary criteria have been made much stricter in the interest of the welfare of our horses.

The first Quilty was declared a success by the riders and on the day after the ride, plans were made to form an Australian Endurance Riders Association, to formulate riding rules, adopt veterinary standards as advised by David Hutchins and his assistant Bob Rawlinson and adopt a constitution. This all became fact at the time of the second Quilty in 1967. Our first president was Gabriel Stecher of Victoria, the famous bareback winner of the first Quilty in 1966. The first secretary was Erica Williams of Queensland, and Ron and Val Males formed a sub- committee to attend to the details of running the next Quilty in 1968. No mean task!

The seeds had been sown, and this infant sport took several years for the numbers of competitors to grow. Shorter fifty mile rides began in all the States and endurance rides began to be accepted as part of the horse scene. Hoofs and Horns magazine continued to give endurance lots of coverage with stories, photos and printed the T.P.R. charts of all the early Quilty Rides.

The original plan was for the riders to compete for a prize of $1,000. It was thought that this incentive was needed to encourage riders to train and travel their horses to Richmond, N.S.W. Professor Hutchins stated that he would not supervise the ride if prize money was awarded. So riders rode for their own personal satisfaction and a trophy of a silver buckle, ‘the Quilty buckle’, now so proudly worn by riders from all over Australia and overseas. The $1,000 donated by Tom Quilty, a Kimberley cattleman and a great horseman, was used to make a Gold Cup, now known as the Tom Quilty Gold Cup. It is a perpetual trophy, and the ride was named the Tom Quilty 100 Mile Endurance Ride in his honour. It has become our Australian National Championship ride.

It is interesting to reflect on where these first endurance riders came from. They had little information to help them in this special field of horsemanship. It was a case of learning by trial and error and the most successful drew on their experience of riding on large stations, droving and commonsense. Electrolytes for horses were unknown and strapping techniques had to be developed.

So it can be seen that the Quilty has always been a National endurance ride that had its beginnings in the Hawkesbury district of N.S.W., because it was considered to be the most central venue for riders from all States to travel to. Two women from West Australia even travelled to it in the early years. N.S.W. always had the advantage of numbers because they had the least distance to travel, some only a few miles.

In 1986, a referendum of all endurance riders in Australia resulted in the decision to move the Quilty from State to State in rotation. The numbers of riders increased dramatically as riders who couldn’t afford to travel long distances to the Quilty in New South Wales now had the opportunity to compete in the Quilty in their home State. It is an enormous task for each State committee to run the Quilty for the Australian Endurance Riders Association, but this only comes around every sixth year.

Due to the strong foundations laid by the early veterinarians and riders of the veterinary standards and the riding rules and the continual strengthening of these by the Australian Endurance Riders Association, our sport is proudly taking its place among other equestrian disciplines. Australian horses and riders are able to compete and win at the International level and Australian endurance horses are in demand overseas. Perhaps one day an Australian endurance team will compete at Olympic level!